The Korean War Veterans Memorial is located near the Lincoln Memorial on the National Mall in Washington, D.C. It was dedicated on July 27, 1995. The memorial commemorates the sacrifices of the 5.8 million Americans who served in the U.S. armed services during the three-year period of the Korean War. From June 25, 1950 to July 27, 1953, 54,246 Americans died in support of their country. Of these, 8,200 were listed as missing in action, or lost or buried at sea at the Honolulu Memorial, at the time of the Korean War Courts of the Missing dedication in 1966.  In addition 103,284 were wounded during the conflict. As an integral part of the memorial, the Korean War Honor Roll was established, honoring those U.S. military personnel who died worldwide during the war.

The 19 stainless steel statues were sculpted by Frank Gaylord of Barre, Vt. and cast by Tallix Foundries of Beacon, N.Y. They are approximately 7-feet tall and represent an ethnic cross section of America. The advance party has 14 Army, three Marine, one Navy and one Air Force members. The statues stand in patches of juniper bushes and are separated by polished granite strips, which give a semblance of order and symbolize the rice paddies of Korea. The troops wear ponchos covering their weapons and equipment. The ponchos seem to blow in the cold winds of Korea. The statues are identified below: 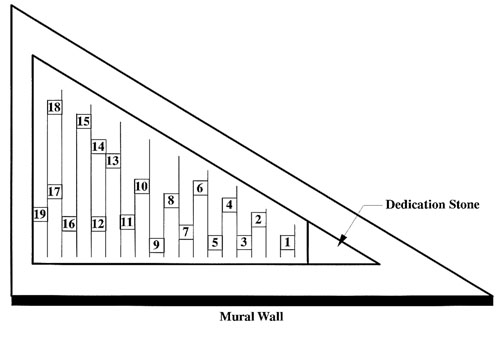 The mural wall was designed by Louis Nelson of New York, N.Y. and fabricated by Cold Spring Granite Company, Cold Spring, Minn. The muralist, sculptor and architect worked closely to create a two-dimensional work of art adjacent to the three-dimensional statues. The wall consists of 41 panels extending 164 feet. Over 2,400 photographs of the Korean War were obtained from the National Archives. They were enhanced by computer to give a uniform lighting effect and the desired size. The mural, representing those forces supporting the foot soldier, depicts Army, Navy, Marine Corps, Air Force and Coast Guard personnel and their equipment. The etchings are arranged to give a wavy appearance in harmony with the layout of the statues. The reflective quality of the academy black granite creates the image of a total of 38 statues, symbolic of the 38th parallel and the 38 months of the war. When viewed from afar, it also creates the appearance of the mountain ranges of Korea. It is organized by service as shown below:

The point of the triangle enclosing the statues reaches into a circular pool approximately 128 feet in diameter. Water is fed into the pool from its bottom and it flows over a stepped weir to give a pleasant rippling sound. Surrounding the pool are 28 linden trees shaped to create a barrel effect, which will allow the sun to reflect on the pool. Seven benches, located under the trees, provide a place for visitors to rest and reflect on the terrible price the youth of America paid during the war. On the wall that extends into the pool area, written in 10-inch silver letters, is the reminder:

Freedom is not free

A kiosk containing the Korean War Honor Roll stands at the west entrance of the memorial. It is serviced by a park ranger, who provides assistance to visitors. The Honor Roll computer contains the names of all military personnel who lost their lives during the Korean War, including the individual's name, service, rank, service number, date of birth, hometown or county of entry into the service, cause of death, date of death; and, if the information is furnished to ABMC, the serviceman's unit, awards, circumstances surrounding the death or missing in action, and photograph.

You may send information and/or a photograph to ABMC about an individual serviceman who was killed during the war to request a Korean War Memorial Honor Roll Certificate.

The curb running along the northern side of the statues contains an alphabetical listing of the 22 nations that participated in the Korean War. Seventeen nations provided combat units and five medical support.

At the point of the triangle leading to the American flag is the dedication stone, which reads:

The memorial was established by ABMC, but is administered by the National Park Service. 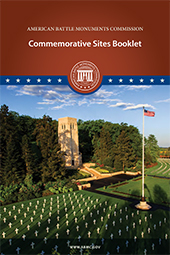