On March 4, 1945 a B17 piloted by Lt. Col. Earle J. Aber, Jr., crashed into the North Sea. While most of the crew bailed out, he and his co-pilot, 2nd Lt. Maurice J. Harper, both lost their life that day. A search after the crash only produced limited remains belonging to Aber. His family chose to have these recovered remains interred at Cambridge American Cemetery. In the late 1990s/early 2000s, further remains were recovered from the crash site. Some of the remains were positively identified as belonging to Aber, some were positively identified as belonging to Harper, and some could not be positively identified. The remains of Aber were added to his gravesite at Cambridge American Cemetery. The remains of Harper were buried in a private cemetery in the United States at the request of his family, and the comingled remains that could not be identified were interred together at Arlington National Cemetery.

When an individual’s remains have been accounted for by the U.S. Department of Defense, a rosette is placed next to the name on the Wall/Tablet/Court of the Missing to mark that the person now rests in a known gravesite. 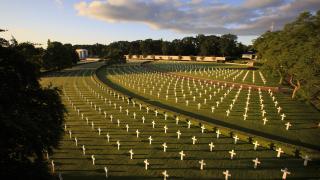