Memorial Day at 150: A Look Back at the History of this Solemn Ritual

This year marks the 150th anniversary of Memorial Day. While remembrance of America’s war dead took place prior to 1868, it wasn’t until the post-Civil War era that this national commemoration fully emerged. Maj. Gen.  John A. Logan, a former Union officer,  can be credited with popularizing this practice. As a commander of the Grand Army of the Republic, an influential organization of Union veterans, Logan  issued a decree standardizing a tradition already found in  a number of places: “The 30th of May, 1868 is designated for the purpose of strewing with flowers or otherwise decorating the graves of comrades who died in the defense of their country during the late rebellion, and whose bodies now lie in almost every city, village and hamlet churchyard in the land”.  Today, Memorial Day, originally called Decoration Day, is America’s annual rite to commemorate our war dead. Across the nation Americans participate in ceremonies to honor the fallen, or reflect upon their sacrifices in a more private setting.

Burial practices for the American military have evolved over time. Prior to the Civil War, the War Department created cemeteries to serve military installations, including the West Point Cemetery on the campus of the U.S. Military Academy, which dates to 1817. On the battlefield there was no standardized system to identify, bury, and mark the fallen in individual graves. Disease prevention dictated speedy burials. After the Mexican-American War (1846-1848), the federal government recovered the remains of 750 unidentified soldiers in and around Mexico City, and buried them under a obelisk in what is now Mexico City National Cemetery. This practice of a single monument and a mass grave dates back through ancient times. Only the bodies of those whose families had considerable means were likely to find their way home from distant battlefields.

The advent of the Civil War brought with it  vast numbers of war dead. Never before in American history had so many fallen in battle. Thousands of soldiers lay buried across a wide swath of the United States. Nudged along by such activists as Clara Barton and her cadre of supporters, the government  reviewed letters from thousands of women,  part of  letter-writing campaigns  to find lost loved ones and their places of burial. The greater literacy of the era made such an initiative possible. In 1862 the United States assumed the responsibility of creating national cemeteries for fallen Union servicemen, and when possible burying them in individual graves with a marker labeled with their name and other identifying information. The Office of the Quartermaster General  became responsible for the construction and administration of national cemeteries. Those at Arlington and Gettysburg  are the most famous, but many others were built near battlefields across the country. This was a significant development  for  the American military. In the absence of other arrangements, the federal government assumed responsibility for the burial of fallen U.S. soldiers, sailors and marines, and for the maintenance of their graves. 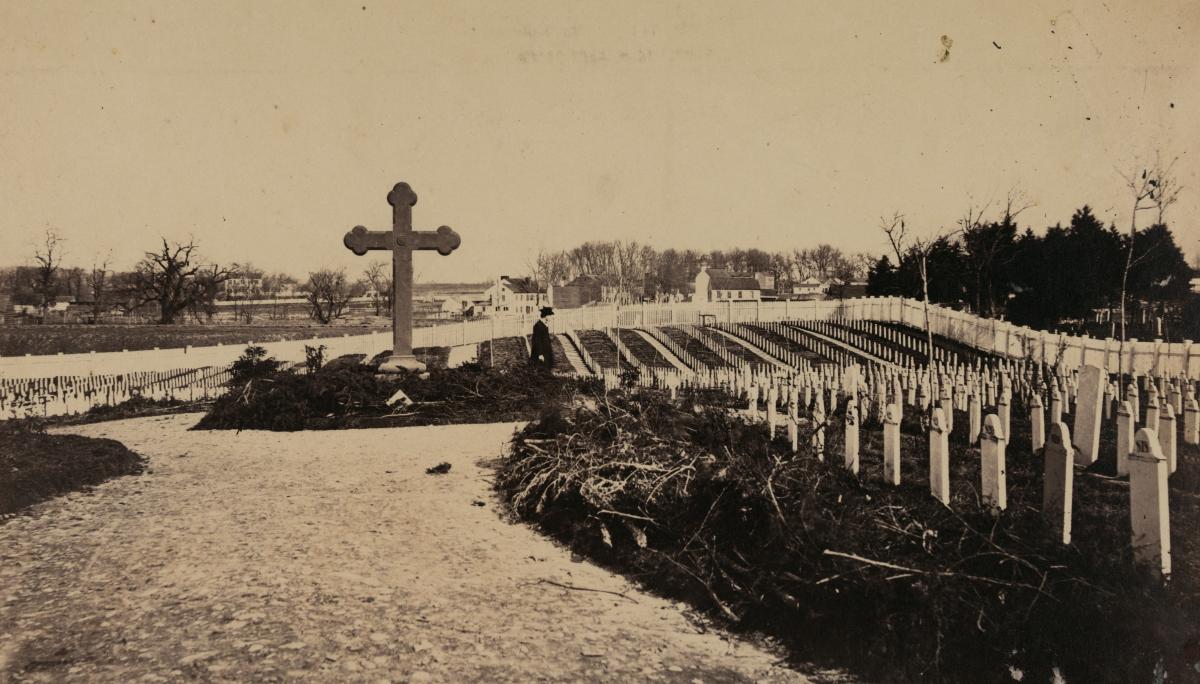 The Civil War witnessed significant advances in organization, transportation and logistical means. Stamped personal identification badges, the precursors of modern “dog tags,” became  common. Commanders were charged with identifying and properly burying their dead.  Systems developed to efficiently care for the wounded. Many injured soldiers were evacuated to a field hospital before succumbing to their wounds. They were buried in a nearby cemetery, in individually marked graves when possible, recognizing the possibility of re-interment elsewhere. Given developments in transportation, including the widespread use of railroad lines, consolidating temporary burials into larger, more manageable cemeteries became far more feasible than before.

In American society, families, and friends had long decorated graves of their loved one with flowers as a sign of remembrance. I In the Civil War many soldiers fought and died hundreds, if not thousands, of miles from home. Local women’s groups got in the habit of decorating graves on behalf of those who couldn’t be there. The origins of Memorial Day are based in these grassroots commemorations. In the years immediately following the Civil War a number of communities from both the North and South honored the war dead and placed flowers on their graves on special days.

Logan’s 1868 proclamation helped consolidate these local observances. The first Decoration Day was celebrated in 183 cemeteries in 27 states. The scale expanded thereafter. In the South, Ladies Memorial Associations and other organizations conducted similar commemorations on dates ranging from April through June. The Spanish-American War (1898) contributed to national reconciliation between North and South. The elaborate “Blue-Gray Reunion” at Gettysburg in July 1913 proved to be a capstone in this process of reintegration. 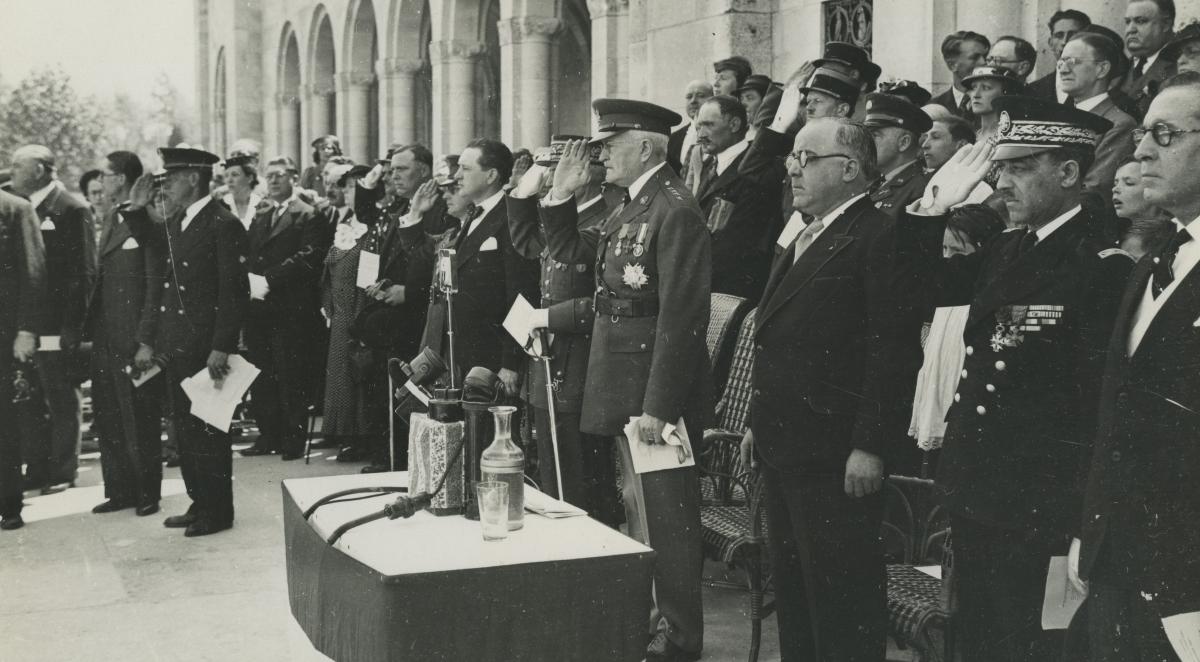 Soon after, World War I mobilized millions of men from North and South alike to fight side-by-side in Europe. More than 100,000 Americans paid the ultimate price in this global conflict.  The U.S. Army commemorated Memorial Day in temporary cemeteries overseas in 1918. The following year, during the Versailles Peace Conference, President Woodrow Wilson gave a Memorial Day address at a nearby American  cemetery,  later be designated as Suresnes American Cemetery. Overseas Memorial Day ceremonies continued after the Great War. These expanded following World War II,  after which the federal government created 14 new cemeteries in Europe, North Africa, and Asia. The shared sacrifices of the World Wars deepened convictions of national unity. It wasn’t until the 1960s that federal law established Memorial Day as the official title, however, and the last Monday in May as the official date.

Today, Memorial Day commemorations occur on local, national, and international levels. The National Memorial Day Concert is broadcast nationwide from the west lawn of the U.S. Capitol. Other observances occur in Washington, D.C., and the U.S. Armed Forces and federal agencies host ceremonies in hundreds of cemeteries and installations around the globe. Yet for many Americans the event is intensely local: parades, commemoration services and ceremonies hosted by churches, civic organizations and cities large and small. At American Battle Monuments Commission cemeteries overseas, local citizens and governments join the observances, poignant expressions of gratitude for shared sacrifices in the defense and liberation of their countries.

Perhaps the most consistent Memorial Day practice remains decorating individual graves, now frequently with a miniature flag. This reflects both the grand sweep and the intensely personal aspect of Memorial Day. The nation as a whole designates a single day to honor all of its fallen service members. Yet each gravesite being decorated represents a single person who answered the call of duty, and died while doing so. In this sense Memorial Day is both national and personal. On this day above all others, let no remembrance be unshared and let no one grieve alone.