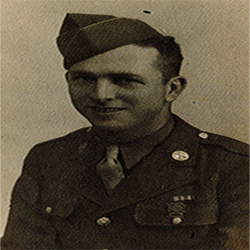 His remains, previously interred as an unknown at ABMC’s Ardennes American Cemetery in Belgium, are now set for burial at Arlington National Cemetery in Virginia.

In Nov. 1944, Owens’ unit was engaged in battle with enemy forces near Hurtgen, Germany, when he was reported missing in action. His status was changed to killed in action on Nov. 23, 1945, and though several investigations were undertaken to locate his remains, he was declared non-recoverable in Dec. 1950.

Owens was believed to be associated with remains designated as “X-2707 Neuville,” which had been recovered in 1946 and buried at the Ardennes American Cemetery. Those remains were disinterred in Aug. 2018 and sent to the Defense POW/MIA Accounting Agency (DPAA) laboratory in Nebraska for analysis.

A native of Green Hills, North Carolina, Owens was 27 at the time of his death. He was assigned to Company E, 2ndBattalion, 12th Infantry Regiment, 4th Infantry Division.

Owens’ name is inscribed on the Walls of the Missing at Margraten American Cemetery in the Netherlands, along with more than 1,700 others who are still missing from World War II. ABMC has placed a bronze rosette beside his name, indicating he has now been accounted for.

For more information on Owens, visit the DPAA website.