The World War II XI Amphibious Force Marker is located in the Britannia Royal Naval College in Dartmouth, United Kingdom. This marker is etched with a historical tribute to America’s armed forces that served in the vicinity during World War II, and to our Allied comrades.

Allied forces  launched the liberation of Europe from the northern shores of the English Channel. Dartmouth was roughly in the center of the sector used by the Americans.  The Britannia Royal Naval College served as the headquarters of the U.S. XI Amphibious Force. Under the supervision of this Force, thousands of soldiers, sailors and airmen prepared for and executed  landings in France on June 6, 1944. The D-Day landings marked a turning point in the war, and hundreds of thousands of troops and millions of tons of supplies then moved  across the English Channel in the following days, weeks and  months. Dartmouth’s geographic location proved ideal for Allied logistical needs.

This marker commemorates the importance Britannia Royal Naval College played in carrying the battle to the enemy, and ultimately overthrowing the grip of Nazi tyranny. It further commemorates the enduring bond between the United Kingdom and United States. The marker reads:

The United States of America honors the courage, sacrifice and achievements
of the U.S. XI amphibious force, headquartered in this building as Allied forces
prepared for and launched the liberation of Europe from these shores.
Under XI Amphibious Force supervision, thousands of soldiers, sailors and airmen
prepared for the landings in France, which came ashore on 6 June 1944.
Hundreds of thousands of troops and millions of tons of supplies moved steadily
across the English Channel as the United States and its Allies carried the
battle to the enemy, overthrowing the grip of Nazi tyranny.
The Allies forged ahead with ever increasing strength and confidence,
securing the blessings of freedom and liberty for generations yet unborn.

This marker further commemorates the enduring bonds
between the United Kingdom and the United States,
forged through shared sacrifice in peace and war,
serving the cause of justice for all.

Dedicated on June 6, 2017 this marker became the 29th managed by ABMC. On the same day, a monument was dedicated in the town of Dartmouth. 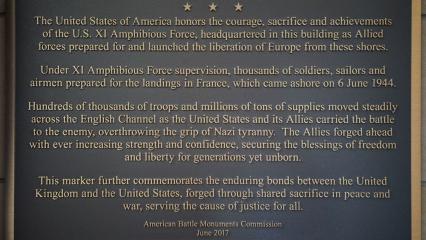 The XI Amphibious Force Marker is located on a wall in the main thoroughfare of the Britannia Royal Naval College. This is a working military establishment and photographic identification is required for access. Please contact the college for visiting hours and tour options.

The XI Amphibious Force Marker is located on a wall in the main thoroughfare of the Britannia Royal Naval College.

Travel via Public Transportation
There are two ferries available between Dartmouth and Kingswear that run seven days a week.  For travel via bus, get off at the M&S Simply Food stop, which is located about a mile from the college.